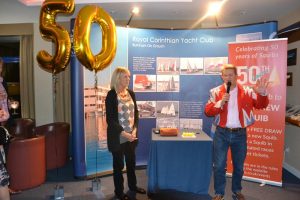 2018 marks the 50th Anniversary of the Squib fleet. Throughout the year, Squib Association members have been racing in local, regional and national events to be allocated tickets into the draw to win a brand new Squib donated by Rondar Raceboats with the support of Super Spars, Hyde Sails, Allen Fittings and CS Boats. On Saturday 3rd November, at the birth place of the Squib – Burnham – the draw was made.

Phil Aspinall, resplendent in that all too familiar jacket, was the compere for the evening and started off proceeding with fireworks in front of Squib 905 and the Royal Corinthian Yacht Club before moving into the club for the draw. He was ably assisted by Jenny Harris (daughter of Oliver Lee – designer of the Squib) in the task of pulling out the winning number using mace coloured ping pong balls (a nod to the class’s striking coloured sails).

Over 12,000 tickets had been allocated and assigned to 300+ members and many had wondered how the draw would work however the process was straightforward and we quickly discovered our winner – David Lloyd of the Portsmouth Squib Fleet! Even better, with the wonders of modern technology, the draw had been streamed live on Facebook and David, along with many others, had been able to watch the proceedings live!

Unsurprisingly David was “gobsmacked”, he thought he had a good chance as had completed a number of the open events around the country, including the Squib Gold Cup at the Royal Corinthian Yacht Club as well the 100 boat Squib Nationals at Cowes, to win tickets however it was only going to take one ticket! As many people are aware, David has been key in building the Portsmouth Squib Fleet, working with charities such as the Portsmouth Sail Training Trust and Oarsome Chance to encourage young people into Squibs.

Currently the Portsmouth fleet has 29 boats and hosted their first open event this September, the 2018 Squib South Coast Championships, with great success (again David was instrumental in this). With the new Rondar Squib, this brings David’s personal Squib fleet up to 3 – he currently has boats 33 (the first Rondar Hybrid squib) and 111 (one of the old numbers) – and is looking forward to trying them all and loaning them to others to encourage further participation in this growing fleet!

David now has the difficult task of choosing the boat colour before it is “officially” handed over at the 2019 Dinghy Show. We all look forward to seeing David and the new Rondar Squib in 2019!

Many thanks again go to Rondar Raceboats, Super Spars, Hyde Sails, Allen Brothers and CS Boats for making this possible, Marian Gibson for working out the logistics of so many tickets and the team at the Royal Corinthian Yacht Club for the spectacular evening of celebrations.