The Squib East Coast Championship 2022 was raced under the burgee of the Royal Corinthian Yacht Club at Burnham-on-Crouch on the 3rd and 4th June. Thirty boats competed, including eight visitors, and there were eight races scheduled with the first warning signal on each day aimed for at 10.55am. The race officer was Edwin Buckley aboard committee boat Phoebe.

The forecast for Friday was for a north easterly increasing during the day in strength, and so it proved as the racing started in ten knots and by the end of the fourth race the race officer recording guests of twenty-eight knots. The sun shone for most of the day. The course was set a mile east of the mouth of the river Roach, with the line set towards the south shore and the weather mark up towards the north shore. The course was a windward leeward and there was a flood tide for the majority of the racing. The north easterly wind was shifting fifteen to twenty degrees but was oscillating across the same range, so after extending the first leg after the end of the first race, it was not necessary for the race officer to shift the course. The windward legs were foul/cross tide beats, so there was plenty of windward work, with shorter downwind legs with a fair tide under the fleet.

The line laid by the race officer enabled the fleet to use the length of the line and at the first weather mark it was clear that the fleet were able to make either wing of the course work, although most preferred the port wing. The racing was close throughout the day, but four boats being What Counts (142), Helmut Shoing II (105), Spoof (811), and Winkles Retreat (881) showed greater consistency than the rest of the fleet. 142 Jono Brown and Chris Agar clocked two firsts, as did Nigel and Jack Grogan in 105, they were closely followed by Micky Wright and Alex Porteous in 811, and then three points behind was Andrew Moore and Paul Halinan in 881. 142 finished the day on top by virtue of also having two seconds, giving them six points for the day against 105’s thirteen, Spoofs thirteen and Winkles Retreats sixteen. Both 142 and 105 seemed to have a slight edge in upwind boat speed, and this caused interest amongst the fleet as 142 was sporting a new suit of Lonton & Gray sails, whereas Nigel and Jack Grogan were unsurprisingly sporting a suit of Hydes.

Jono Brown described the day as a day of good racing, with he and Chris largely being able to keep out of trouble, although at the last windward mark of the last race 142 and 105 approached the mark first and second, although not necessarily in that order, with 811 immediately on their heels and somewhere in the rounding of the weather mark and the spreader mark Nigel and Jack ended up having to do two sets of penalty turns with Jono and Chris taking the win, Micky and Alex getting the second and Nigel and Jack taking the third. 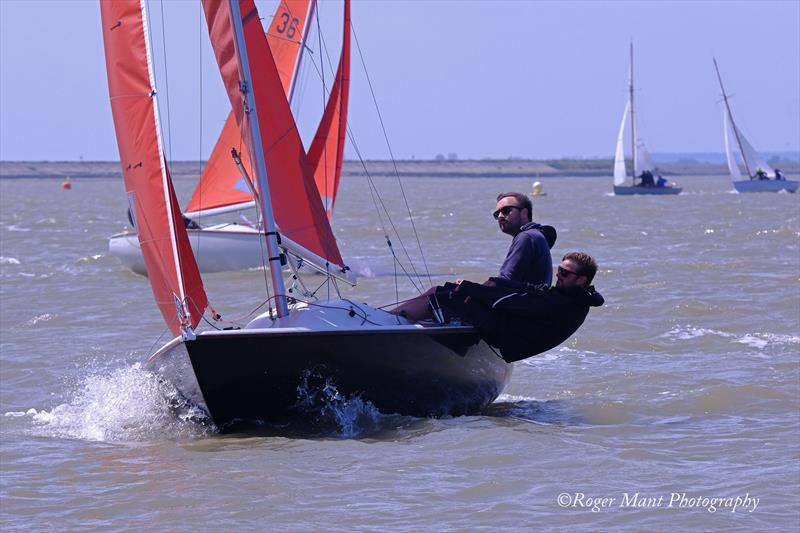 Andrew Moore and Peter Halinan in 881 consistently played the right-hand side of the course and consistently made it work. Nick Milton and Gavin Kemp in 757 steadily improved their performances during the day as the wind rose, finishing with a very good seventh, and fleet newcomer Flynn Davies and Simon Tribe sailing 619 Nenuphar (a borrowed boat) put in three top ten results but sadly had to retire in the fourth race, ending up a creditable eleventh over the day. Bacchante VII might well have had a better day had they not missed the first race because Roly Wilson overslept, and the day of Philip Rust and Jeremy Newman sailing Artemis II (36) would have got off to a better start had they not let their main halyard go up the mast before dropping the mooring, necessitating them taking the mast down and resulting in them missing the first race as well.

The day finished with a dinner at the RCYC following by dancing to Madhouse Blues and Boogie Band until late, with many a drink being drunk to set the fleet up well for the following day’s racing which was forecast to be breezy.

In the event on the following day it was too breezy, with the race officer clocking in excess of thirty knot gusts in the race area prior to releasing the fleet, and so racing was cancelled for the day, leaving Jono Brown and Chris Agar in What Counts 142 as worthy winners of the event with two firsts and two seconds, closely followed by the Grogans in Helmut Shoing (105) and Micky and Alex in third spot in Spoof (811). The leading visitor was Andrew Moore and Peter Halinan sailing Winkles Retreat (881) from Flexistowe.

Daniel Wastnage, the Class Captain and event organiser started the prize-giving at 11am where the fleet thanked Edwin Buckley and his team aboard Phoebe for the Friday’s racing, and Jenny Harris, the daughter of Oliver Lee who designed the Squib was on hand to present the prizes. Phil Aspinall the current Commodore of the Club received the Dick of the Day award for the umpteenth time in his Squib sailing career, for what he suspects is the offence of being Phil Aspinall, and Daniel Wastnage thanked the sponsors of the event with a special mention for the Mighty Oak Brewery of Maldon for them providing 156 pints of real ale at no cost which had been thoroughly enjoyed and quickly hoovered up by the fleet. Those who were able to remember commented very favourably on the band Madhouse Blues and Boogie Band, who have promptly been booked for a return visit for Burnham Week. All in all an excellent event, it was just a pity that there was too much wind on the Sunday. 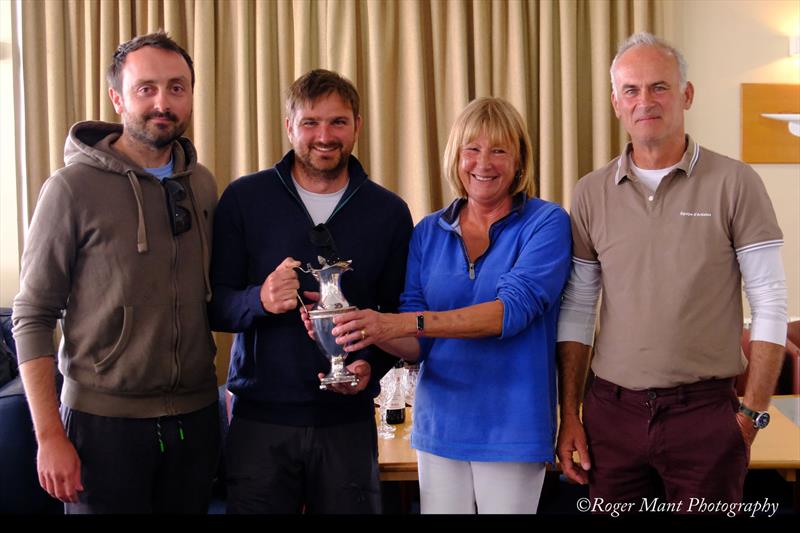