On Saturday, five cruisers met to race to Fambridge for the Eagling Trophy. Mark Eagling in the club RIB, acting as Committee Boat, got us underway in the light Easterly breeze.

As the fleet rounded Black Point, Zelda was being slowly overhauled by Moon Dance and Calypso. Sanderling with her glorious red sails and gaff-rig, and Monarch with the sun gleaming on her gorgeous varnished topsides, remained in close contention.

Entering Longpole Reach, the order was Moon Dance, Calypso, and Zelda, with Sanderling and Monarch in hot pursuit. After a very close race, Moon Dance took line honours. However, the winner of the 2018 Eagling Trophy was the gallant Sanderling, nudging Calypso off the top spot by a mere 15 seconds.

Sea Hound of Dart (Tim and Sarah Matthews) cruised to Fambridge with a sealed document case containing the top-secret Spangle Trophy quiz papers. We met in the Ferry Boat Inn for our meal, joined by David and Janet Hill (Team Spangle), where the fiendish quiz was unveiled. All became silent, apart from the sound of frantic head scratching, as the competitors tackled questions on subjects ranging from yacht architecture to club history. The Spangle Trophy and The honour of presenting next year’s quiz was won by Team Eagling on count back from Team Calypso.

Thanks go to Tim and Sarah Matthews for preparing the quiz, and Mark Eagling for acting as Committee Boat. 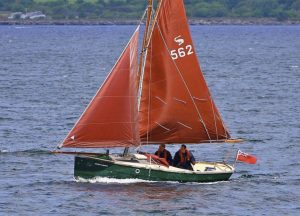