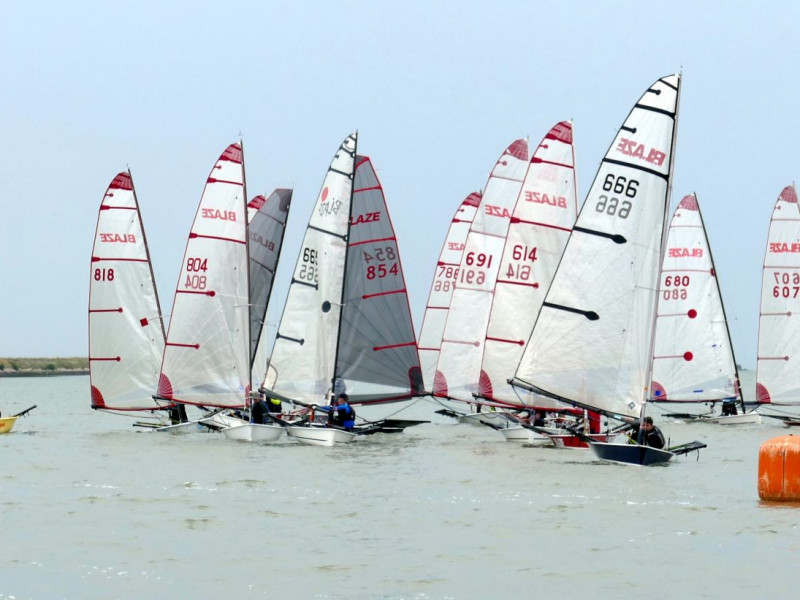 The 2020 Blaze Easterns was my first event in the Blaze and it was a matter of hanging on (quite often to the centreboard) for survival in the strong winds. This time round I was prepared and had even acquired a fire sail “just in case”. However as Saturday came around, there may have been plenty of activity in the dinghy park but the breeze was light and there were murmurings of a postponement. Phil Aspinall (PRO & RCYC Commodore) had clearly paid attention to the weather forecast though and instead of waiting it out onshore got us sailing up the Crouch to the vicinity of the Roach where we were met by a gentle breeze and sunshine – perfect.

A trapezoid course was set and race one was started with only a small delay as the wind continued to fill in. The fleet were clearly very keen to get going and it took three attempts (and the appearance of the black flag) before the race truly commenced. Unfortunately, Ian Pittendreigh (788) was OCS and required to peel off to watch the antics from a distance as the fleet hugged the shore on the run and tried to keep out of the melee round the leeward marks. As expected, Ben Harden (860) continued his winning streak and was followed across the line by Nic Tolhurst (849) whilst Micky Wright (705) proved that Mark 2 Blazes are not slow in taking 3rd. Races two and three followed a similar pattern for Ben, though I was told that Nic was ahead of him at one point (unfortunately a bit too far away for me to notice) in race two. Race three saw the effect of the black flag once more and this time it was Nic Tolhurst and Stuart Mears (sailing Malcolm Hutching’s blaze) who fell foul and headed home for the early beer giving Tye Wichard (716) and Rory Munro (854 – only the second time in the Blaze) to take 2nd and 3rd respectively.

The team at the RCYC provided great food, beer and company as competitors tucked into hearty portions and enjoyed a few games of miniature boat racing (winding string as quickly as possible to pull a model boat across the floor). Attempts were made to put Ben off his game with tequilas and rum being consumed but as similar amounts were being drunk by other participants, questions were raised as to whether it would have any effect!

Day two and the weather couldn’t have been more different – breeze, clouds and rain! Racing was intense and a fair few got their capsize practising in early (yours truly was very grateful for the all the practice she had last year). Unfortunately gear failure meant the end for a couple but for the rest of us (and a few new faces who could only make the second day of racing) it was brilliant fun. Again, it was Ben and Nic who took first and second in each of the races whilst Ian Pittendreigh showed consistency with thirds across the board. For the rest of us, there were plenty of position changes and many battles fought so whilst the first two places overall were pretty clear, it was still all to play for the rest of the top 5. Ultimately it was Tye Wichard who with some consistent racing took third place overall ahead of Ray Apthorp (777) and Micky Wright (also first Poly boat).

Once boats were ashore (thanks to everyone who helped with the launch and recovery – a great job) and crews refreshed, prize giving was held. A huge thanks was given to the PRO and his team for the running of such a fantastic event, wine and cheers were also given to the safety teams who were definitely kept a bit busier on the Sunday and of course Nic Tolhurst for organising. Then onto the prizes which were very kindly provided by Allen, The Old Salt Loft, and Rooster. As well as prizes for the top 5 as mentioned above, prizes were given to the furthest visitor (Ian Pittendreigh – all the way from Aberdeen), highest place newcomer (Rory Munro), endeavour prize for the completion of all races (Jason Phelps), first lady (Alex Porteous, although some dispute as to whether the award should have gone to Keith Gilmore for using his fire sail on Sunday!) and a special mention and prize was awarded to Liam Hannah the boat breaker of the weekend – the parts broken is too long to list.

Overall a fantastic event brilliantly supported by the Blaze fleet with 29 entrants and a number of new faces who I am sure we will see more of on the circuit over the coming year.