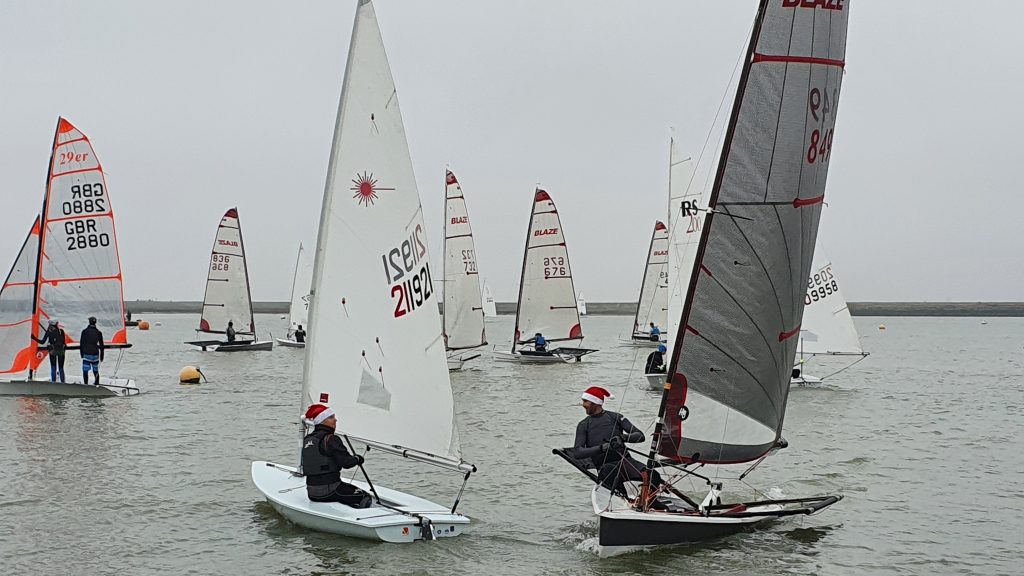 At the end of the five race series there were 30 boats out on the final Saturday 18th December for the ‘winner takes all’ showdown to put Hamilton and Verstappen’s efforts into the shade, with four boats in with a shout of victory in this prestigious (snow) global event! 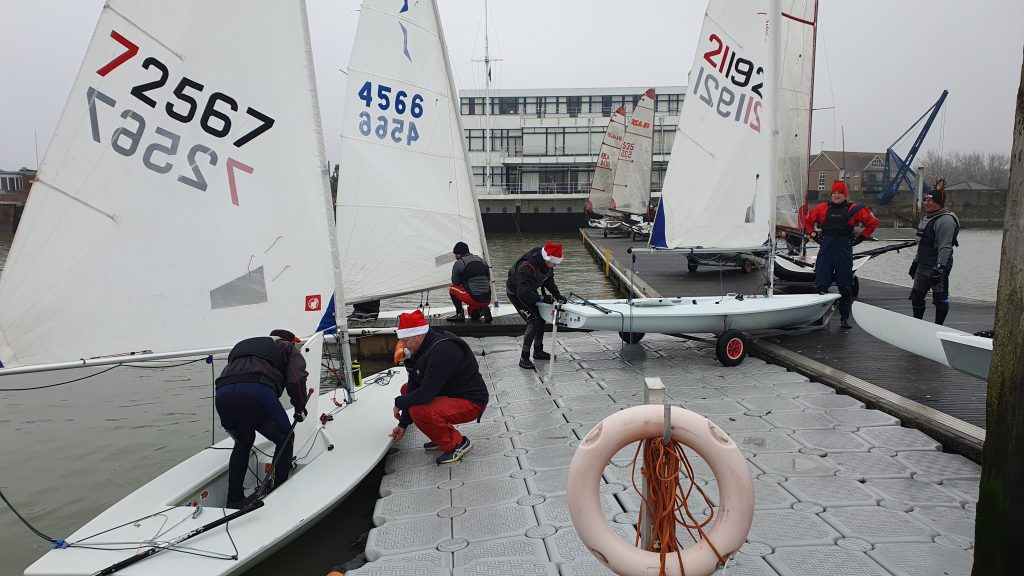 With Christmas hats, jumpers and decorations aplenty, a great turnout of 30 boats was greeted by a rather grey and subdued morning, with light winds and a tide due to change between races, and the age-old question of “which side to start ?!”  was heard being muttered up and down the start line.  Those who attended (or listened to…) the briefing were at a strategic advantage, with the full club line available to them, so the fleet ended up with a split of those who chose to short tack up the south shore and those who opted for the long leg into the mark.  It was close, but the short tackers just lost out at the first mark, and the leaders were away in clear air.

A rare blunder by Nic Tolhurst saw him heading (unnecessarily) through the gate on the upwind leg, thus handing his comfortable lead to Ben Harden who seized the opportunity and took the first race honours.  Further down the fleet was a story of misjudged mark roundings (in my defence, the wind died…), sitting and watching the fleet trickling up behind on the downwind legs, and plenty of place changing.  Flynn and Caitlin rounded out the top 3 with a comfortable lead over the other RS200s.

Race 2 saw a drag race to the first mark with the 29er, a bevvy of Blazes and some RS200s arriving in close succession.  With the tide on the turn, the choice of looking for breeze or keeping out of the tide became a tricky one, with gains and losses being made, and throwing up some opportunities on the cross-tide legs.  Once again Messrs Harden and Tolhurst were battling it out up front, but the 29er sailed by Oscar and Meghann was eking out a lead on the water which would bump Nic down to the third spot on the podium.

At the end of a great series, with over 50 entries, it was Ben Harden who secured overall honours from Nic Tolhurst and Malcolm Hutchings, and was duly awarded the Snow Globe trophy for 2021.

Results of the series