The 1930’s the beginning of the Benson/Mitchell era 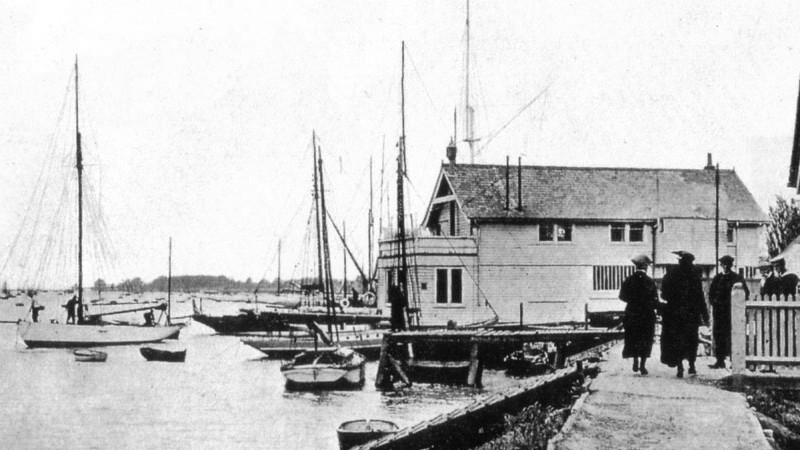 During the year 1929 decisions were taken which, by their boldness and imagination, were to influence fundamentally the future of the Royal Corinthian.

The Club was now into its second half-century. Among its members there were some who realised not only that a new Clubhouse was required but that the style of the new building should look into the future as to its design as well as to the amenities it should offer.

In this year there were still a few members alive whose memories went back to the days when the Club had been established at Erith in 1872. Indeed, in August of 1929, a link with these days was broken by the death of T.G.F. Winser. Teddy Winser was born in 1851. In 1884 he was appointed Secretary of the Corinthian Yacht Club at Manor Way, Erith. It was to him that was addressed the official communication in 1892 from Whitehall acceding to the request that use be made of the title “Royal” in the name of the Club.

Winser was known in yachting circles throughout the British Isles as the Secretary of the Corinthian for more than a third of a century, continuing in that office till 1919. Winser remained at Erith when, in the early nineties, the Club established a branch at Burnham in the Clubroom at the White Harte Hotel for the benefit of members who sailed round from the Thames. He was in charge of the move from Erith to Port Victoria on the Isle of Grain. When Port Victoria was taken over by the Government, Burnham ceased to be merely a branch. Winser moved to the new headquarters on the Crouch which were situated on Mr. Prior’s Wharf at the western end of the quay, a building which was destroyed by fire some years after the Royal Corinthian gave it up.

Subsequently, the Corinthian merged with the Eastern Yacht Club of England and moved into that club’s headquarters in the building now known as the Old Club House at the eastern end of the Quay. (The Old Club House had previously been used by a local boat builder for the purpose of his business). Later on the Dormy House was built on adjoining land.

At the time of Winser’s death, plans were being prepared to rebuild the Club premises. These were announced in general outline at the Annual Dinner of the Club at the Connaught Rooms in London in November, 1929 by Frederick A. Roberts, the Commodore. It was, however, at the Annual General Meeting of the Club in February 1930, also at the Connaught Rooms, that the first decisive steps were taken to implement the decision to proceed.

At this meeting there appears to have been a “palace revolution”. The two senior flag officers (Roberts, the Commodore, and Lieut.-Cdr. Percy T. Dean, V.C., the Vice-Commodore) resigned, as did eight (virtually one half) of the members of the Committee. The Rear-Commodore, Philip de Gylpyn Benson (who had only been elected to that office in 1929) became Commodore : F.G.(Tiny) Mitchell was elected a flag officer for the first time in the position of Vice-Commodore and J.S. Bacon became the Rear-Commodore. The new Honorary Treasurer was Percy P.E. Sabel (the father-in-law of the writer of this article), succeeding J.A. Milne who had held that office continuously since 1905.

The new Committee which was then elected, and which was in office during the erection of the new Clubhouse, consisted of D. McCrae Aiken, J.R. Bedford, W.B. de Ste. Croix, J.E.W. Flood, F.J. de Guingand, J.G. Hoperaft, Basil H. Joy, R.P. (Dippy) Knight, W.J. Mason, E.W. Monkhouse, L.L. Robinson, T.H. Seaton, M.H. Shepard, J. Somerville-Craggs and H.A. Tonge. Prior to this meeting, the Secretary of the Club had been Captain F.W. Watson but he was now succeeded by Commander E.R. Carrington-Smith.

The new flag officers and committee were elected to carry into effect a number of important decisions by the members (who at that time numbered 536) which entailed very radical changes in the Club. In the first place, the finances of the Club had come under scrutiny, and it was decided to increase the amount of the annual subscription which had remained unchanged since before the First World War. The increased subscription was fixed at four guineas, with lower rates for junior members.