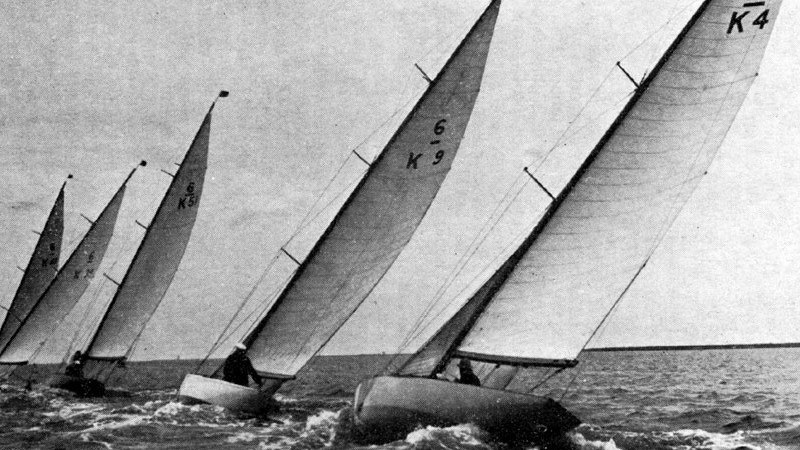 By 1912 the designs of 6 Metres had begun to settle down and the rule was producing boats of some visual similarity. However, people were beginning to wonder if the International Rule wasn’t all a mistake. It was said there was no scope for new designers and gave as an example that of the seventy-seven 6 Metres built forty-five were the work of two men (G.U. Laws and perhaps either Mylne or Linton Hope).

This gloom did not prevent new boats being built, however, in particular Bunty designed by Laws for T.D. McMeekin who in a generous spirit sold her almost at once to a Mr Tarrant of the Royal Thames YC. (It seems that Mr Tarrant had made a challenge for the One Ton Cup then held by Germany without having himself a suitable challenger). To the delight of many Bunty won at Kiel, sailed by E.G. Martin. Other ‘sixes’ racing on the Crouch that year were Jonquil, Chaero, The Whim, Sprite, Sioma, Cheetal and Gypaetos.

The Menagerie Race gets its first mention on October 5th, 1913. The season started early again, on March 22nd. The previous season both the Eastern One Designs at Burnham and the Corinthian One Designs at Port Victoria suddenly disappeared from the match books. If the past was anything to go by, this could only mean that a new class was in the offing. So it proved to be.

One had only to wait until June to see the latest wonder of the age launched at Port Victoria – the NEW Club One Design. The names of the first three boats were Chittabob IV, Midiye and Widgeon. This class not only killed off the Port Victoria One Designs and the Eastern One Designs but very nearly did the same to the Seabirds, of which a maximum of five only were left racing at Burnham.

In the following year the new class, now renamed East Coast One Designs, with a fleet of five regularly racing at Burnham, gave the coup de grace to the Seabirds.

The last Burnham Week before the war (1913), in which the Club organised the Monday, Friday and Saturday racing, included races for 6 Metres which Vanda, sailed by Captain R. Dixon “the Solent Crack”, won easily. Gybo, still to be seen on the river, turned out then for the first time.

The fateful year of 1914 was set to be an active and successful one with the new ECODs by now nine in number, racing to Port Victoria from Burnham and back, to Harwich, to West Mersea, to here and there. The big 15 Metres turned out at Port Victoria in June as usual – Paula, Hispania, Mandrey and Istria. Additionally there were the cruiser races.

The last race of the season took place on August 8th. The last words in the match book are “All races from now to the end of the season cancelled on account of the War”. The club house at Port Victoria was taken over by the Admiralty and when yachtsmen returned after the war, the Burnham premises became the new headquarters of the Club.

The story of the Club in the 42 years of its existence at that time reflects its promotion of amateurism in yachting and of racing in smaller classes. The special contribution of the Club was the popularisation of the sport and the success achieved in bringing yacht racing within the reach of many. The Club had also contributed greatly to the improvement of yacht design by its continuing fostering of one design, restricted and YRA rule classes.

There was an obvious need for such a club in the 1870s and by 1914 the Royal Corinthian had clearly achieved what was described as the sole object of its formation, namely, to encourage amateurism in yachting.