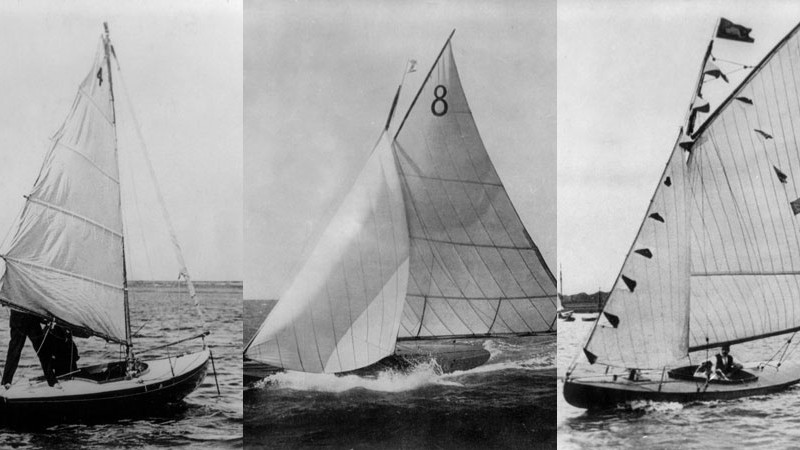 In 1895 the Royal Corinthian broke new ground with its “one class, one design” Dabchick. We are now accustomed to One Design classes. The idea was a new one in 1895 and caused much debate. One school of thought took the view that if all boats were the same the only difference between them would be in the quality of the crew. It would be deadly dull, it was considered, not to be able to modify one’s boat or perhaps commission a new one of improved design.

The Dabchicks were LOA 20 ft. LWL 15 ft. with Bermudan mainsail, roller foresail and centreboard. They were to a design offered by Linton Hope. The Dabchicks proved unsuitable for novices (as a start!) since they capsized fairly easily. In their second year they were fitted with lead keels to correct this and a lugsail replaced the Bermudan mainsail. Approximately 20 boats were built at a cost complete of £42.14 each. Surely no class in the Royal Corinthian ever had a shorter existence. It disappeared from the match books of the Club in 1897 after only two years of racing. They are recalled today by the handsome challenge trophy in the form of a shield presented by T.H. Roberts which is now raced for by the young members of the Corinthian Otters.

Perhaps the Club was anxious to get on with the new Linear 18 footers which made their appearance in 1896. This was one of the most successful classes ever fostered by the Club – races also being given on the river for the “18s” by the London Sailing Club. Among the class racing at the time were: Turquoise – F.R. Smith and C.E. Liles (Sibbick), Lady Little Acre – W.P. Burton (A.E. Payne), Opal – George Terrell (H.W.Ridsdale), Crafty II – J.A. and R.S. McMullen (H.C. Smith), Theorette – F.W. Gould and L.S. Rose (R. von Engerke), My Lady Dainty – S.N. Griffiths (G.U. Laws), Kismet – Linton Hope and Opal II – G. Terrell (Thomson and Campbell).

Two of the above names are of particular interest—George Terrell, then Commodore of the London Sailing Club, later to become Sir George Terrell, MP, and Gilbert Laws, talented designer of famous boats in many small classes.

The Crouch in 1896 was being explored by the yachts of the “newly arrived” Club. In June there was a race for cruisers to the West Buxey. In August the committee chose a new course “up to Fambridge”. However, the Crouch was not the only subject for exploration that year. The Corinthian decided to form a new class. Maximum cost was to be £200 for a boat of 24 ft. length — either (a) unrestricted, (b) restricted or (c) one design. The meeting which took this decision was a revolt of the small classes against a new rule which the YRA proposed to adopt. In the event, this rule was rejected by the YRA Council in face of opposition organised to a large extent by the Club. The sub-committee finally set up to consider details of the proposed class of 24 footers included no less than 17 prospective owners. Their names read like a Who’s Who of yachtsmen of the time. As a result it was recommended that the new class should be of 24 ft. Linear rating with a minimum displacement of 2 tons, planking and deck to be not less than 8″ finished thickness—the rule to remain unaltered for three years.

T.G.F. Winser, concerned with this new development, was then Secretary of the RCYC. He was clearly an energetic man since he not only had time to attend to the duties of a Club Secretary but also to marketing “Yachtsman Blend” Scotch whisky at 43 shillings per dozen from an address at 72 Mark Lane, E.C. The decision to adopt this new class was applauded by the magazine The Yachtsman of that year, the Club being referred to as “remarkable for its enterprise”. The next year. 1897, saw the launching of four of the new 24 footers, the first race taking place on May 8th.

Before passing on from 1896, two other matters are worth notice. First a letter to The Yachtsman which reads very topically

London Yachtsmen may be excusably unaware of the existence of a modest handbill which has been circulated lately in Burnham-on-Crouch and presumably a few neighbouring towns. It reads as follows:

Meetings will shortly be held in this and other neighbourhoods to protest against the closing of no less than 8 railway stations against Sunday traffic, on the Burnham, Southminster and Maldon lines by the G.E. Railway Company. Persons sympathising with the movement and wishing to join a committee are requested to communicate by post card with J. Nunn, Purleigh, Essex.

In former years the state of things was bad enough. Now, speaking of the yachting fraternity only, and leaving out the needs of the inhabitants, Burnham has three yacht clubs and will shortly have another so the position of the yachtsman is he has travelled hot and compressed for several months from Liverpool Street to Burnham and is suddenly met with the announcement that not only have several week-day trains been taken off but that there is not a single train on Sunday…”

Secondly, reference was made in The Yachtsman of June 18th to the advantages of the Medway as a home port with its ready access to and from London. The Corinthian, as usual never slow to take a hint, called a Special General Meeting of the Club in December 1897 at the Cannon Street Hotel…

“for the purposes of considering certain proposals for changing the Headquarters of the Club from Erith to Port Victoria. The proposals appear to be highly advantageous for the Club and we understand embrace greatly improved railway facilities. The change, all things considered, should be very desirable for there is no comparison between Erith and Port Victoria as yachting stations either for cruising or racing”.