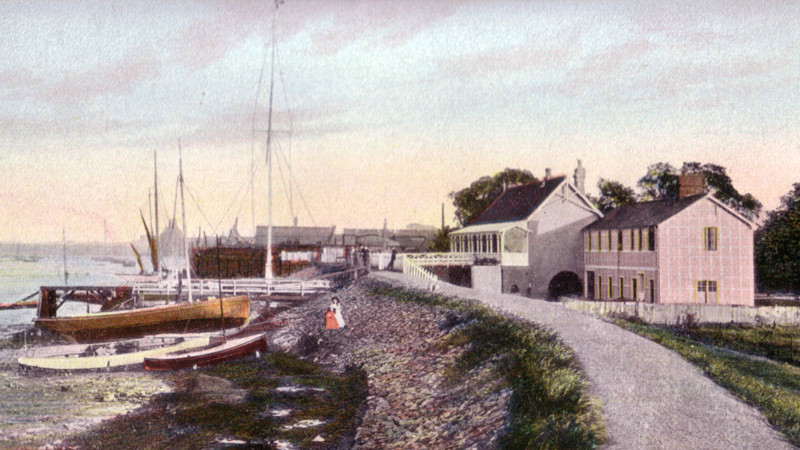 In the first years of its existence the Club gave races in the smaller classes, generally of 5-6 tons. Boats racing regularly included Virago, May, Alouette, Freda, to be joined later by Zephyr, 10 tons. From 1875 to 1880 ten tonner racing developed – Lily, Florence, Merle, Mildred, Chip, Preciosa, Juliet, Elaine, Robinson, Maharanee, and the celebrated Buttercup. A race on 26th August, 1875 was won by the Mildred and last year we were fortunate enough to acquire from a connection of the owner, Francis Turner, the handsome silver plated claret jug which she won as a prize on that occasion.

In April of 1878 the Committee “having in view the future convenience of the Club”, appointed a sub-committee to enquire into and report the respective merits of the various stations on the river for the erection or lease of a club house for the sole use of the members, As a result, on June 12th 1879 the first club house was officially opened at Erith. This event was celebrated with a “cruise in squadron” under the command of the Commodore, Mr Telford Field, and a dinner in the evening at which 72 members sat down. The Club house stood in an acre of land and consisted of a large club room 70 ft. long, a committee room and a bunk room.

Members might care to note the painted sign board now in position over the dining room door at Burnham1 which formerly hung in the Erith club house. Underneath the club were extensive stores with twenty large sail lockers let to members at thirty shillings per annum.

In 1880 the match books of the club were started. We have none before that date. After every race details were filled in meticulously by (presumably) the Honorary Secretary who also posted in the book press-cuttings containing a report of the races in question. These leatherbound match books are in the library at Burnham2 and provide a splendid record of Corinthian racing up to April 1950 when they were discontinued due, no doubt, to the effort of writing up the intensive racing of the many classes by then on the regatta programme.

The 3 ton class was established in 1881. No paid hands were allowed on these boats. There was Muriel, Maramah, Mascotte, Naida, Primrose, Venilia, and Snarley Yow. Next year Chitty Wee spread-eagled the fleet and was in turn knocked out by Currytush whose unvarying success really killed 3 tonner racing. This was also the year in which the popular Ramsgate Race was inaugurated – though it seems that the race happened to start at Ramsgate and finish at Erith. In subsequent years the start and finish were reversed.

The warrant to wear the Blue Ensign was issued in 18843.

The Club produced its first custom-built class called the Special 21 footers in 1888. This class was limited to 500 ft. of canvas and could have a fixed keel or centre-board. Four boats took to the water at the beginning of the season  – Mehalah, Tottie, Haze and Fancy, to be joined later by Eva, Diskos, Dorothy, Genie, Magnolia, Saivnara, March Hare, Narwhal, Nyleptha and Macnab. Watson, Fife, Dixon Kemp, J.T. Howard, Douglas Stone, A.E. Payne, A. Watkins, Wyllie and others produced interesting designs within the rule. Tottie, designed by Watson, held on for five seasons due in large measure no doubt to the Simpson brothers who raced her. Among the names of owners are those of Simpson, Frost Smith and Linton Hope which appear in the annals of the club for many years to come.

In 1892 the Club received the royal title. This seems to have been taken fairly phlegmatically by the members. There is no direct reference to this “ennoblement” in the match book – the last race as CYC being given on June 21st and that on July 2nd reported under the heading RCYC Perhaps after all they had a “capital dinner” the size and liquidity of which erased all recollection from the mind of the archivist of the time.

In the same year a branch of the club was opened in a room at the White Hart, Burnham, and on June 5th a number of boats sailed round to Burnham from the Thames to visit the new branch. The following year the London Sailing Club based in Hammersmith also started a branch with a club house in Burnham which was to be open for the months of July, August and September, the intention being to hold a regatta for raters at Burnham towards the end of the season. This regatta was the forerunner of Burnham Week. With the appearance on the Crouch of yachts of the RCYC races began to be regularly held under the auspices of both the London Sailing Club and the RCYC.