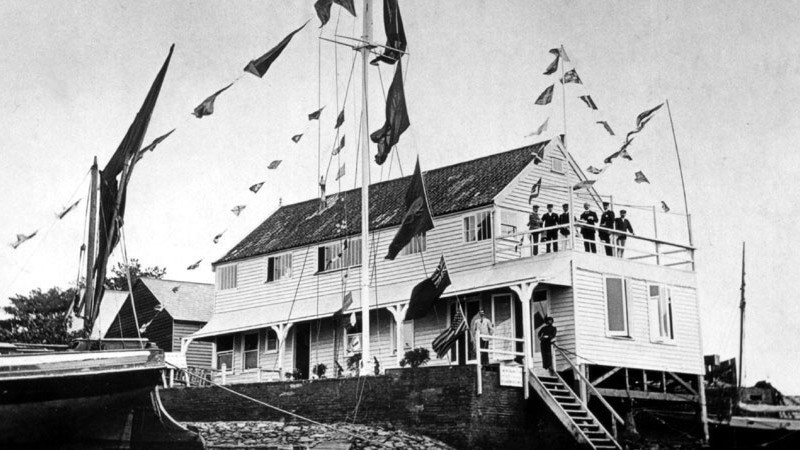 The first year of the 20th century was also the Club’s first full year at Port Victoria. Looking through the match books one gets the impression of an uneventful year though with most of the racing taking place at Port Victoria. Even the 18 footers, hitherto an apparently exclusively Burnham class, held many of their races on the Medway.

The Burnham to West Mersea race seems to have been inaugurated on June 29th, 1901. In subsequent years it became the first cruiser race of the season with yachts being divided into classes according to tonnage. The other annual events, namely, the races to Harwich and Ramsgate, continued but starting now, of course, from Port Victoria. The year of 1902 seems to have been rather humdrum enlivened only by reference to the Medway Kittiwakes, namely Mimosa, Pensee, Fugitive, Kittiwake, Petrel, and Fulmar, the last two being owned by the Royal Engineer Yacht Club.

So it continued, with frequent cruiser racing in classes ranging from under 10 tons up to 50 tons with irregular 24 footer class racing at Port Victoria and enthusiastic 18 footer events at Burnham, until July 16th, 1904 when as we know the 24 footers vanished to be replaced by the new Corinthian One Design. This new fleet, based at Port Victoria, consisted of six boats, namely Dotterel, Ohi, Malista, Jolexa, Hearty, and Nora (later Circe). Designed by G.U. Laws, they were 25 ft. LOA, 17 ft. LWL, 6 ft. beam and 3 ft. 6 ins. draft, gaff rigged with 300 sq. ft. of canvas. They bear a family resemblance to the most long-lived and successful class of all, the East Coast One Designs from the same designer.

They were an immediate success, to such an extent that even the sacred month of August, during which no yachtsman (not even a Corinthian) normally raced, was violated by the arrival of the new class at practically full strength for the Saturdays 6th, 13th, 20th and 27th and all Augusts thereafter. This class was distinguished by the regular way in which it turned out, usually at full strength or with seldom more than one missing. In 1907 the Sea View Yacht Club in the Isle of Wight adopted the same class with minor alterations, calling them the Sea View Mermaids.

At about this time the 18 footers, hitherto racing as a single class, suddenly seemed to divide themselves into two groups – restricted and YRA. This appears to have struck a death blow at the class so far as the Corinthian was concerned. After the race on July 15th, 1905, at which 8 boats turned out, they disappear from the match books. However, they were not to go unreplaced for long.

Meanwhile we revert to the Eastern Yacht Club of England. Because of its subsequent amalgamation with the Royal Corinthian in 1911, the story of that club is of interest to us. The Eastern decided in 1906 to introduce a new One Design class costing complete no more than £40, suitable for novices to race, with the intention of extending the membership. The design of Mr. H.C. Smith of the Burnham Yacht Building Company was adopted. A similar class was already in existence, known as the Orwell Corinthian One Designs. Mr T.D. McMeekin and Mr Warwick Brooks volunteered to place an order for six boats to get the class started. Five of these were taken up immediately. These were Chum, Elf, Sue, Toddles, and Raffles, to be joined later by Peter Pan. At the start they were called Eastern One Designs but when subsequently transferred to the Crouch Yacht Club they were re-named Crouch One Designs. They were raced regularly till 1939 and a number of these pretty boats can still be seen on the river.

The decision was also taken by the Eastern Yacht Club to phase out in 1908 the 18 footers which had given such excellent sport since 1896, and to replace them with a class of 6 Metres built to the new International Rule which had been adopted in January 1907. The Flag Officers of the Eastern Yacht Club responsible for these decisions were Commodore George Terrell, Vice Commodore J.W. Leuchars and Rear Commodore Warwick Brooks.

Returning to Corinthian matters, in 1907 races were given for the 15 Metre class at Port Victoria, and on May 31st Sonya, Britomart, Shimna and Ma’oona came to the line. In the same year the “ex-24 footers”, dismissed from Port Victoria in 1904, were adopted by the Burnham Yacht Club (now the Royal Burnham), Mr. T.G.F. Winser, the Royal Corinthian Secretary, being appointed official handicapper. On June 20th their start was from the Pile House Line first installed that season. Racing amongst this class became very competitive, and two years later the Yachting Monthly was able to report of a race during Burnham Week that ”the start of the ex-24 footers was particularly keen – Chittabob III crossing the line within a minute of gunfire!”

The 6 Metre class turned out for the first time in 1908, the class being fostered by both the Eastern Yacht Club and the RCYC. The Crouch clubs were leaders in the field with this the smallest of the Metre classes, to be followed quickly by the Clyde. The Solent, in general, tended to build to the 7, 8 and 15 Metre rules. This famous and durable class continued to race at Burnham more or less regularly until 1949. The first entries for the Club races on June 29th and 30th were: Sibindi – J.W. Leuchars (Mylne), Gipta – A.G. McMeekin and F.R. Farrow (Linton Hope), Dormy – T.D. McMeekin (Laws), Alien – G. Terrell and Warwick Brooks (Anker), and Hinemoa – Frank Varley (Linton Hope). Dormy, designed by Laws, was the first Olympic Gold Medal winner. She sported the pointed counter peculiar to some of Laws’ boats, an example of which can be seen to this day in the 6 Metre Gybo.

The next year, 1909, was full of interest and innovation. It saw firstly the introduction of the complicated Premium Time System otherwise known as Temps Prime. This was another in a long line of systems intended to make handicapping of similar as well as dissimilar boats fairer. It seems to have been enthusiastically adopted and tested by the Corinthian and then quickly discarded.

Secondly, the Seabird Class made its first appearance on the Crouch and continued racing up to the outbreak of war in 1914. The Class was designed by J. Pain Clark to dimensions similar to those of the Corinthian One Designs racing at Port Victoria, namely 22 ft. LOA, 17 ft. LWL, 6 ft. beam. They set 300 sq. ft. of canvas and had an iron keel of 1800 lbs. The trophy, a shield, which was presented by Lindsay Bashford, now hangs in the library at Burnham and until recently was raced for by the present Royal Corinthian One Design class. It is not now clear why this trophy only bears the names of the winners for years 1909, 1910 and 1911. Perhaps the winners of years 1912 and 1913 were too modest to have their names inscribed. Perhaps like some of the present day owners they were too idle. The Seabirds consisted of:

The third event was the International Regatta for 6 Metres which the Club held at Port Victoria from July 5th to 8th. Entries from abroad were received from Nino (H.R.H. Prince Phillipe of France), Pas Op (M.von Bernuth), and from Scotland Crusader, sailed by George Moir – the Clyde crack from the Royal Northern YC. This seems to have been the Club’s first try at an International Regatta. It was well organised and received favourable comments from the Yachting Press.

In 1910 there occurred the same phenomenon with the new Seabird Class at Burnham as we had earlier observed with the new Corinthian One Designs at Port Victoria. They were keen to race – and they started on 26th March! The Club was clearly in the grip of One Design fervour and several joint races with the Port Victoria fleet took place during the season. The two classes, as noted before, were very similar though the One Designs all had gaff mainsails, the Seabirds high-peaked or gunter lugs. These races showed little difference in performance between the two classes.

Boats racing in the 6 Metres that year at Burnham included Embder, Sibindi, Dormy, Damia (formerly Alien) and Gypaetos, a famous Laws boat in her first season. She was reckoned to be invincible in any sort of breeze and though she did not manage to win the One Ton Cup that year she beat the winner of it four times out of four races at Kiel. Those days are recalled in the Kaiserlicher Cup now raced for by Dragons in Burnham Week which was originally won on that occasion by A.G. McMeekin who presented it to the Club in 1947.

The event of 1911 was the absorption of the Eastern Yacht Club of England into the RCYC – the Eastern’s premises (the Old Club House) becoming the Burnham branch club house of the Corinthian. In May of that year George Terrell, the energetic and enterprising Commodore of the Eastern, resigned his flag. The fusion of the clubs seems to have been first publicly mentioned in November when the Crouch was said to be over-stocked with club houses. The amalgamation was ratified at the AGMs of the respective Clubs, F.D. Last becoming Commodore, A.E. Messer Vice-Commodore and T.D. McMeekin, a former flag officer of the Eastern, becoming Rear-Commodore of the Corinthian. One can only speculate as to the underlying reason for the amalgamation – certainly the drive of the Eastern was necessary then to the Corinthian and perhaps the wealth of the latter was being put to beneficial use.