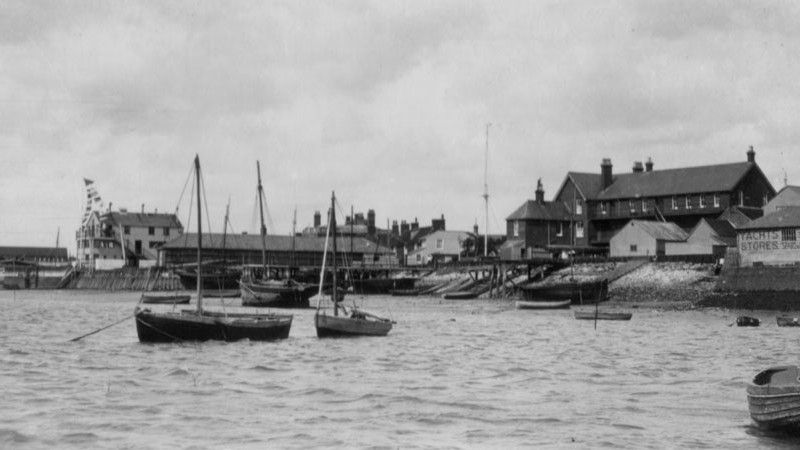 On December 16th, with the Rear-Commodore F.C. Capel in the chair, it was resolved to enter into an agreement with the South Eastern Railway Company for the erection and tenancy of a club house at Port Victoria, the rental not exceeding 5% of the capital outlay incurred by the Railway Company in construction of the club house and causeway.Port Victoria, located at the end of the railway line on the Isle of Grain opposite Queenborough, was then considered as giving unusual opportunities for racing over a circular or triangular course in open conditions. No trace of the club house now remains, being obliterated by the oil installations. While the new club house was being built there was evidence of a shift of interest and activity to the Medway, a number of club races from Erith now finishing at Queenborough. The starting line at Port Victoria was off the Victoria Hotel where members began to dine regularly, and certainly on May 22nd, 1899 (the occasion of the opening race) and again on September 2nd that year when the new club house was still uncompleted.

Thus ended 27 years of the Club’s connection with Erith. At the start, Erith was a village. The Pier Hotel stood in the Erith Gardens on the waterfront. By 1897 it was being rapidly developed. The gardens had made way for a coal wharf. Many things influenced the committee in deciding to move the Club – industrialisation of the area, pollution of the river and overcrowding of the tideway by vessels awaiting docking further up the river. The Club left its mark on Erith, however. The old club house may still for instance be visited on the premises of British Gypsum Limited, and the name is recalled in ‘Corinthian Manor Way’ which leads from the main road to the club house.

The construction of the new club house at Port Victoria was completed one year after the new branch club house at Prior’s wharf at Burnham was finished. This latter substantial building stood on the site now occupied by the crane until the fabric was burnt down in 1914.  One can only wonder at the enthusiasm and energy of the members that enabled the Club to undertake and finance the construction of not just one but two large club houses in consecutive years. The Club has moved again since those days and will doubtless bear this in mind in the future if it is to preserve its unique status as a national “Corinthian” Yacht Club not anchored in any particular waters for longer than this remains in the interests of the members.

It seems that despite the laudatory notices the 24 footers were not immediately popular. The class, which was started at Erith, initially consisted of five boats Chittabob III, Paketa, Mousrne, Hochelaga and Spillikin, to be joined in 1899 by Jack Straw, Vineta and White Heather. Three or four boats turned out fairly regularly in the years 1898 to 1903 when they were killed off so far as the Club was concerned by the new Corinthian One Design Class, launched in 1904. The 24 footers then disappear from Port Victoria and the match books of the Club – but turn up again at Burnham in 1907 as the “ex-24 footers”. In June six came to the line, and in August there were 12 starters, more than had ever before turned out in a race. As “ex-24 footers” they seemed to achieve a fame and popularity which had eluded them before, and races for this class were still being given during Burnham Week until a few years before the 1939 war.