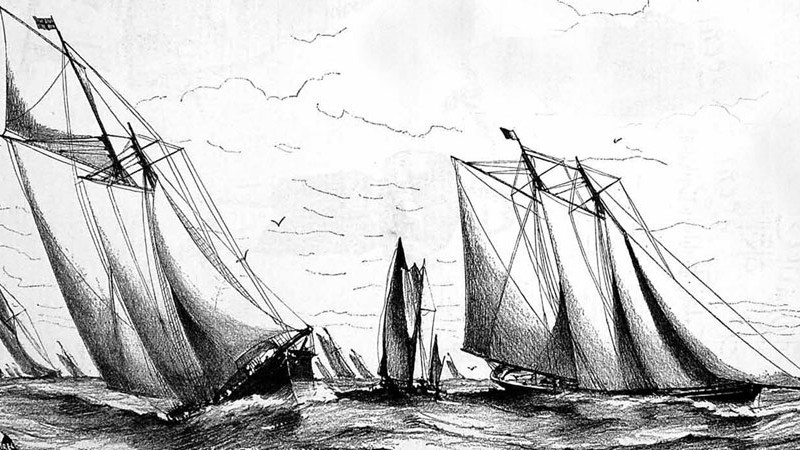 One hundred years ago rich men used to race yachts in much the manner they race horses today – for large prizes and with the use of highly professional methods. For example, in 1871 the schooner Egeria, 152 tons, with seven firsts and four seconds won prizes to the value of £780, and Fiona, a cutter of 78 tons, won £750, equivalent to £7,000 – £9,0001 in terms of today’s money. Yachts such as these were crewed entirely by paid hands with professional skippers. There was little scope for amateurs in such a set-up.

A healthier tide however set in as “Corinthianism” spread among certain yacht clubs. This word was derived from the Isthmian games of the Greeks held at Corinth in honour of Poseidon. It’s a long jump from Corinth to Kent. Nevertheless with the completion of the South Eastern Railway it was possible in 1872 for places like Greenhithe, Gravesend and Erith, at that time pleasant riverside villages, to be readily accessible from London. Thus the scene was set for a letter addressed to the Editor of the Field dated May 18th of that year from which it is worth quoting:

Everyone who commences yachting and is desirous to become a good yachtsman however large his means should begin in a small yacht or he will be simply sailed about, and never obtain that knowledge… which is only to be had by experience…

What is wanted on the Thames is a nursery in the shape of a club entirely devoted to the interests of the owners of small vessels, and for the promotion and encouragement of amateur sailing.

A Club might be formed for vessels under 15 tons with a convenient rendezvous such as at Erith with accommodation where owners and members could meet. Frequent matches should be arranged… All matches to be sailed by amateurs but one paid hand to be allowed who shall not touch the tiller… But what is really wanted is a club room and boathouse on the bank of the river…

Such a club could easily be started by a committee of energetic gentlemen. I am aware that there are two clubs already on the Thames where amateur sailing is practised viz. the Junior Thames and the Thames Sailing Clubs : but with all due appreciation of the efforts of these clubs, which deserve all praises for the energy displayed in their localities, neither of them aim at the wants I have pointed out.

(It is interesting to note that the Junior Thames YC, then in its second year at Greenhithe, was subsequently absorbed by an indirect route into the Royal Corinthian.)

Clearly all the spade-work had been done and diplomatic canvassing completed since no more than two weeks later a notice appeared in the June 1st issue of The Field reporting the formation of an amateur Yacht Club devoted to “Windward’s” ideals and that this would be based at Erith “the principal yachting station of the Thames”.

A letter next appeared in the issue of The Field of June 8th which read that at a meeting held at the Pier Hotel “last Tuesday” the club was named the Corinthian Yacht Club. The letter continued

…. A committee composed of yacht owners was appointed to draw up the rules …and the constitution of the Club requires that with the exception of the paid hand, the crews should consist of members of the Club…. the Corinthian Yacht Club will therefore practically consist of a number of yacht owners anxious to encourage amateur yacht sailing and of such of their friends as may be willing to assist….

The first fixture list of the Club appeared in The Field on June 22nd, June 29th being fixed for “the opening trip”, and July 1st for the first match. By then the Club had grown to 130 members – not bad recruiting figures for one month! The first match was a success, the day being completed, one is glad to see, by a “capital dinner at the Pier Hotel” – unfortunately long since demolished – at which each winning crew received a tankard with a suitable inscription. An example of such a “pot” is the silver tankard won by Virago, 6 tons, in a Second class match held on May 11th, 1874. This tankard is now the Easter Trophy of the Dragon Class at Burnham.

The end of this first year produced a farcical situation. In October the Temple Yacht Club decided to change the insignia on its burgee to a yellow winged horse rampant, being the Inner Temple arms. Unfortunately the Temple Yacht Club did not seem to know that the Corinthian had chosen the same insignia for its burgee. A letter to The Field of December 21st signed by one whose initials E.H.B. thinly disguised the identity of E.H. Bellairs, then Honorary Treasurer, describes the situation.

I see in your impression of Saturday Week that in the notice of the Temple Yacht Club dinner a controversy occurred respecting their newly adopted flag – the winged horse rampant on blue ground.

You will remember that the flag chosen in June by the Corinthian Y.C. was Pegasus, the Winged Horse of Corinth, which is of course a winged horse rampant and that, at the last meeting of the Temple, they adopted the same identical flag which had already been flown by the Corinthian Club for six months.

Whatever may be the rights of the T.Y.C. to a winged horse rampant, I certainly think that in this priority is everything and that a club like the Temple which has flown the letters T.Y.C. for nearly twenty years should not go out of its way to jostle the flag of another club.

When news of the affair reached the yachting press, mirth and heat were generated. However, those most closely involved, namely the secretaries of the two clubs dealt with the problem with dignity and courtesy. An amicable solution was reached whereby the Corinthian agreed to change its insignia to the present day Laurel Wreath – the Temple being free to adopt the “winged horse” and agreeing to take over at cost the dies, etc., already purchased by the Corinthian.

If an Annual Meeting is an important event in the life of any Yacht Club, the First General Meeting can be described as vital since it can set the direction to be followed for many years. The Corinthian Yacht Club meeting was held at the Cannon Street Hotel on November 5th, 1872 and was preceded by dinner at which thirty members sat down. Mr J.J. Whatley presided supported by Mr W.M. Dowdall. The Club strength was reported as 249 members and 74 vessels. The meeting struck the note that has sounded throughout the life of the club – that of the innovator. They proposed to consider the shaping of a new rule which would bring draft into measurement of vessels for rating purposes – a subcommittee being appointed to look into this. This was pretty radical thinking, for in those days racing vessels were designed to the Thames Rule which penalised beam but took no account of draft – thus leading to the plank-on-edge type so patronised by the nabobs of the time.

Though the Corinthian Rule was intended to apply only to the Club’s comparatively small yachts, the echoes of controversy sparked off by this action rang in high circles for years to come. When, for instance, in 1874 it was thought that the New Thames Yacht Club were preparing to adopt the Corinthian Rule for measuring their own much larger yachts, there was a strike of owners who hauled down their racing flags at the preparatory gun in protest just before the start of a race.

Unlike General Meetings nowadays the Corinthian’s first, for unexplained reasons, did not elect officers. It was left to a monthly general meeting held in January 1873 to elect as Vice-Commodore Mr Telford Field, Mr J.J. Whatley resigning the chair in his favour. The posts of Commodore and Rear Commodore were intentionally left vacant for the time being. This does not agree, as it happens, with our present-day members’ list! This records that Mr F. Willan was Commodore in 1872 and Mr J.J. Whatley Rear Commodore.

This article was originally published in 1971 within a chapter of 100 Years of Amateur Yachting – a book produced to celebrate the 100 Year anniversary of the creation of the Corinthian Yacht Club.

The end of the Nineteenth Century

The first RCYC One Designs

New Clubhouses on the Crouch and Medway

The beginning of the Twentieth Century