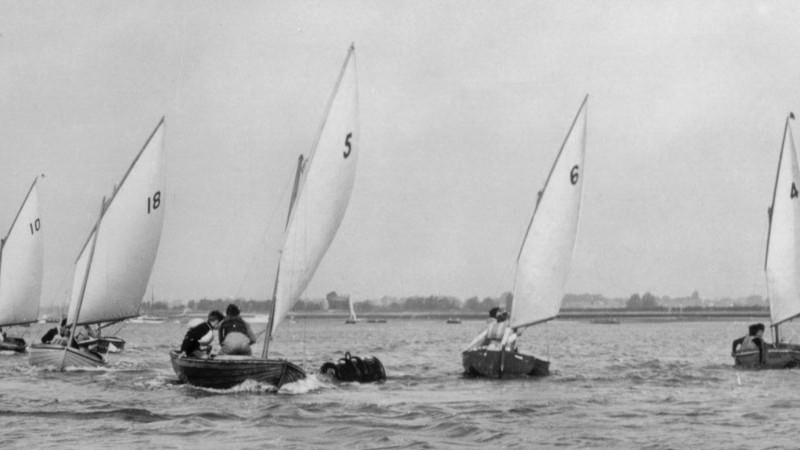 The Corinthian Otter Club was established in 1930 by F.G. Mitchell, the Commodore of the Royal Corinthian Yacht Club, and Mrs Mitchell, for the purpose of encouraging children of members in sailing, boat handling, swimming and general knowledge of yachting, both racing and cruising.

To an extent character forming came into the idea as well, since it was laid down that the Club members should elect their own Flag Officers and Secretary to run the Club with the assistance of a Secretary from the Management Committee of four parents or RCYC members.

Much of the early records of the Club were destroyed by enemy action in the war, when the Mitchell’s home was bombed. A small building near the Corinthian was rented as the club house, and this was opened officially on April 21st, 1934 by Sir Claud Champion de Crespigny, who had established the famous Otter Swimming Club on the River Blackwater.

He was under the impression that he was opening a branch of this club at Burnham, and showed some surprise to find that, instead of an Otter diving in after his opening speech, an Otter dinghy was launched. With the firing of a gun the Otter club burgee was broken at the mast on the club house by “Bud” Mitchell, the first Commodore of the Club.

At that time there were some forty members, their ages ranging from eight years to eighteen. Subsequently in peak years the numbers have risen to over eighty, in what the members described as the post-war bulge. In the early days only Otters who had passed their sailing, rowing and swimming tests were allowed to wear the club badge, the Corinthian wreath with an “0” in the centre. Otters who had passed all their tests with the exception of swimming, were Otter Cubs, and the very small children were Otter Pups, and each had the appropriate letter in the Corinthian wreath. It is interesting to note that at that time these badges stitched in gold wire were priced at 1/6d. each!

To begin with Otters sailed a variety of boats, some owned by the parents and others lent to the Club. Eventually the 10 ft. 6 in. Scow was adopted as the main class, and a 12 ft. Bermudan rigged, clinker built dinghy for the older Otters; the latter known as the “big” or “J” class! Most of these boats were owned by individuals, but the Club acquired three Scows which were chartered to members for the season. Later an International 12 sq. metre Sharpie and a Corinthian One Design were acquired by the Otter Club, but subsequently these were found to be too expensive in maintenance, and were sold.

By the end of the war the 12 ft. (J class) dinghies had all been sold, but the Scow class soon increased to some 18-20 boats and gave some keen and interesting racing. Now individual members own Cadets and Enterprises, and in Otter Week races are given for these classes as well.

Races are given at weekends during the holidays, but the main contests are held in Otter Week which takes place during the week before Burnham Week from the Royal Corinthian Yacht Club. A heavy programme of races is given for sailing, swimming and rowing, while in the evenings talks, films, fancy dress parties and barbecues and other social activities take place. There are now some 28 cups and trophies which have been given to the Club to be competed for. In 1970 a popular innovation was the cruising day. For some time it was thought that too much emphasis was put on racing during Otter Week. Accordingly parents and members of the Corinthian with cruisers were allotted Otters as crews for the day, when they learnt the rudiments of navigation, anchor work, etc. This was found to be a great success and will certainly be repeated.

In 1953 a friend of Mr and Mrs Mitchell’s from Denmark invited a team from the Otters to compete in an International Regatta in Copenhagen. This they did, and a girls’ and boys’ team has sailed in these Junior International Regattas each year since, visiting no less than twelve countries.

Some of the clubs pick their crews from all the Junior clubs in their respective countries and are sponsored by their governments, so that small individual clubs like the Otters are up against very strong competition, and have not therefore been outstandingly successful, but in 1967 the Otter boys’ team sailing in Holland gained the Boys’ Cup for Great Britain and the Otter Club.

The competing countries take it in turns to give these Junior International Regattas. The Corinthian Otters held their Regatta in 1959 at Burnham with twelve countries competing. The choice of boats is always a problem, and here through the help of Mr. Mitchell, who built 24 Enterprises especially for this regatta, each entrant had the advantage of sailing a new boat. These boats were subsequently sold and the profit therefrom given to the Otter funds towards the next Junior International Regatta to be held in Burnham in 1972.

Membership of the Otter Club is for children of members of the Royal Corinthian Yacht Club over the age of eight, who must be able to swim 60 yards in light sailing clothes, and be able to row 70 yards across the tide round a moored buoy twice, pass a sailing test and generally be able to handle a boat coming alongside, etc.

The Corinthian Otter Club is recognised by the Royal Yachting Association, and therefore quite independent of its mother club, the Royal Corinthian.

The murals in the dining room of the Corinthian, which depict post-war boats and scenes, were executed by an ex-Otter, Michael Inchbald, now a famous interior decorator. These murals were in fact to camouflage breeze blocks incorporated in alterations, gushed in by the Army during its wartime occupation of the premises (1939-45). All Otters are determined to keep these paintings depicting Club life – irrespective of Club redecoration problems!